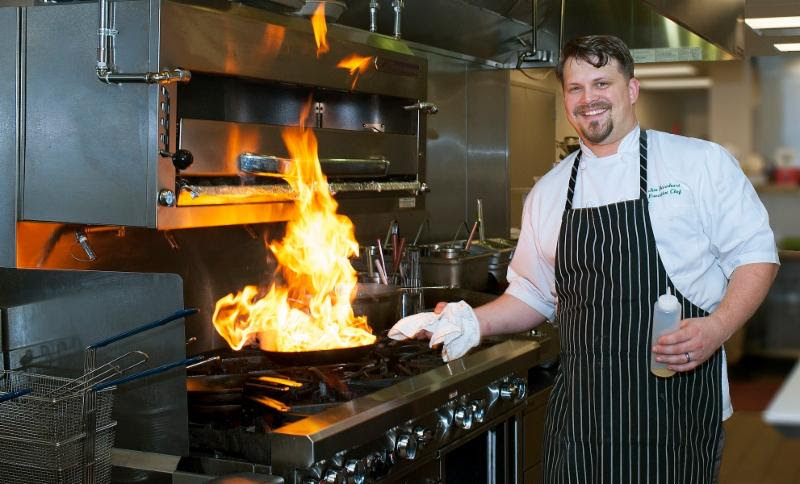 Chef Jim Barnhart seems tailor made for his new role at The Hotel at Oberlin, a brand new LEED Platinum hotel set in the midst of Oberlin, Ohio, one of the most progressive college towns in the country. A Lorain County native, he has his own seven-acre spread nearby and grows a wide variety of vegetables, some of which into the kitchen of 1833, The Hotel at Oberlin’s restaurant, which was named for the year both Oberlin College and the town of Oberlin were founded. 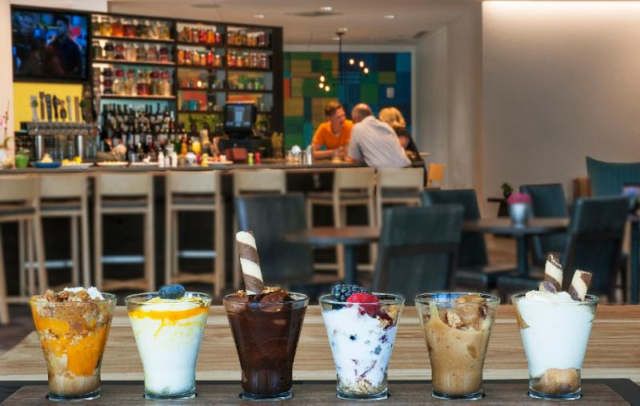 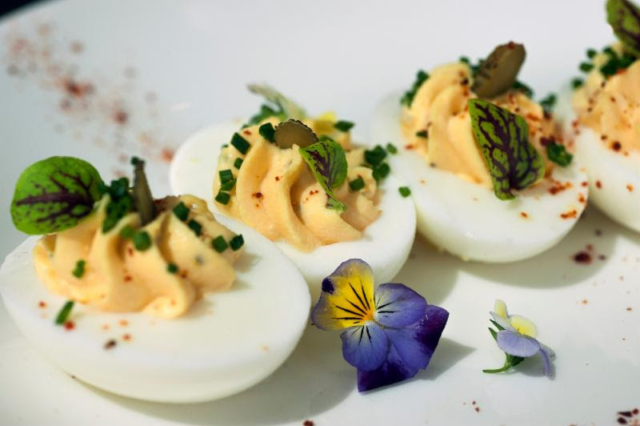 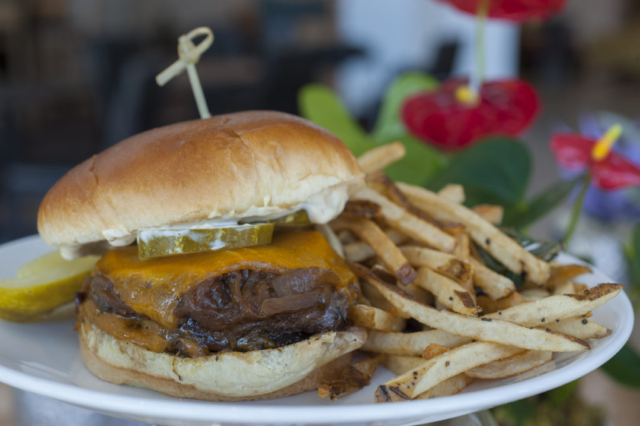 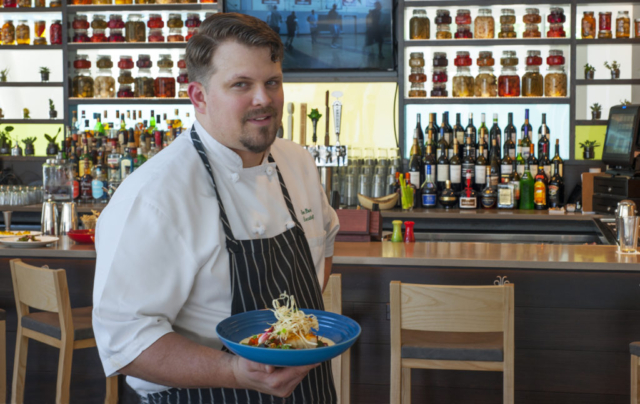 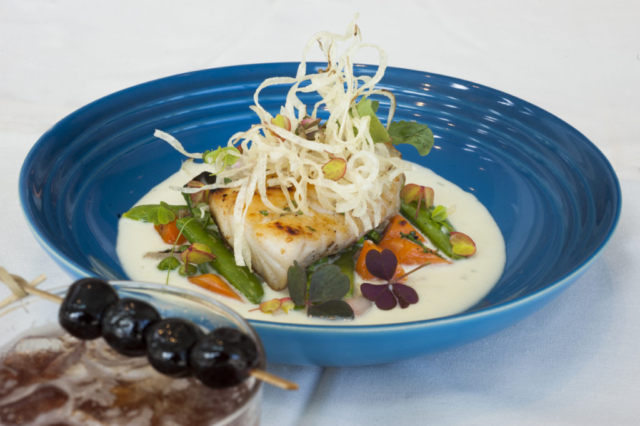 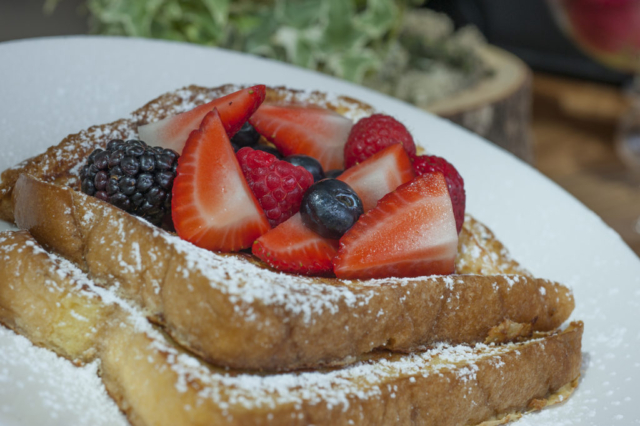 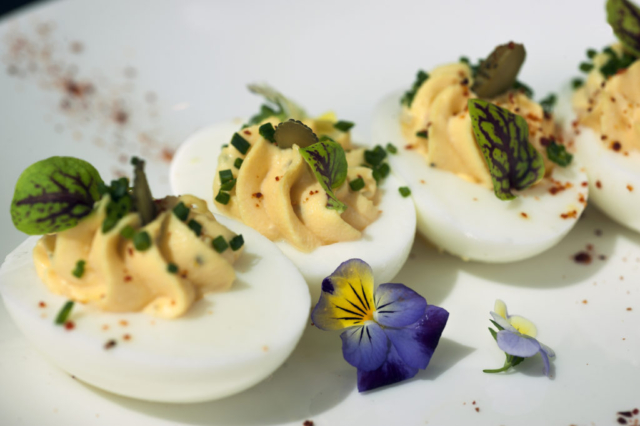 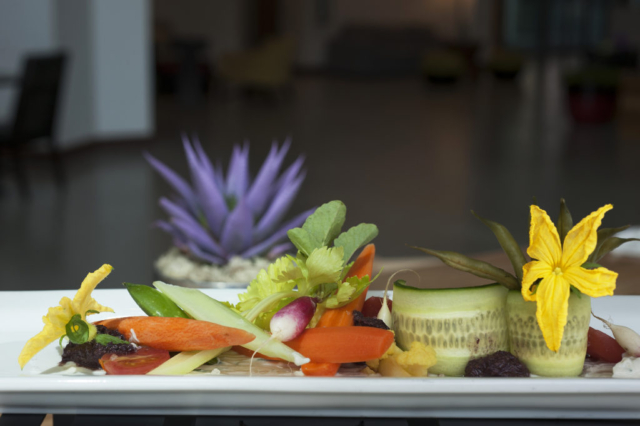 Locals may come in for a hearty breakfast of steak and eggs but there will be younger takers for his root and tofu scramble with parsnips, carrots and potatoes. You’ll also see traditional Midwestern favorites such as deviled eggs and Lake Erie Walleye on the menu of 1833. Those eggs are piped full with a cream egg mix of chives, cornichons, and sweet paprika and sweet relish. That walleye is served with a citrus butter sauce ad shares a plate with a spring vegetable fricassee and shoestring potatoes.

Chef Barnhart is also a fan or wild plants that grow locally, greens that even many residents aren’t aware of. They include “wild foraged ramps, a mild spring onion, which grow alongside creeks and in backyards. And there are morel mushrooms all over the place in Ohio.”

The ramps and the morels find their way into his Forged Ramp Gnocchi, which are served with a Gruyere cream, a slow cooked egg and sea salt.

“I’m working on building more relationships with local farmers,” he says. “I have a local supplier for Gerber chickens, which are all natural, antibiotic free and humanely ranged nearby. I’ m also sourcing Muscovy ducks raised in Oberlin, which is truly hyperlocal.”

He’s also a fan of the orchards of Northeast Ohio, which are “community favorites and right in our backyards.”

They are the source of the local peaches on his menu, in dishes such as the Grilled Peach Salad, served with burrata cheese, basil, and a ruby port reduction. It’s an updated interpretation of the classic peaches and cottage cheese Chef Barnhart often shared with his grandfather.

Flexibility, in a college town where the rules are often stretched if not entirely disregarded, also seems to be a hallmark.

“If it’s 10 pm and someone wants Gran-Ma French toast, we’ll make it,” Chef Barnhart says. “There’s no pretense about it.”

The New York Botanical Garden Celebrates the Holiday Season Day and Night with the 31st Year of the Holiday Train Show® and the Return of NYBG GLOW, N.Y.C.’s Largest Outdoor Holiday Light Experience, Expanded for Its Third Year