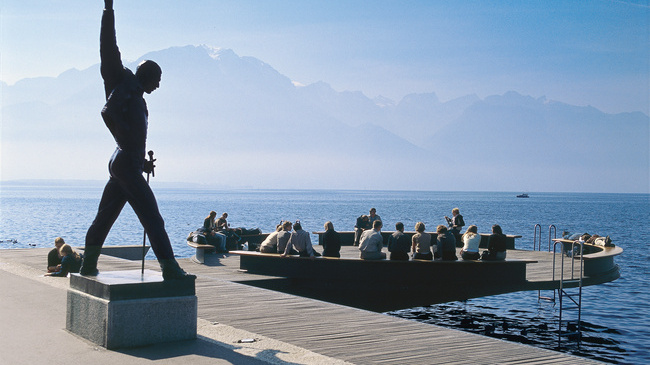 The Montreux Jazz Festival celebrates its 51st year June 30–July 15, 2017. One of the most famous music festivals in the world—and second largest jazz festival—Montreux has retained its signature style by bringing top performers to small venues, creating an intimacy despite attracting more than 200,00 visitors during its two-week run.

Whether it’s a performance in one of the three main venues, a smaller outdoor concert, or an after-hours set the festival runs the gamut of musical styles and performers. This year’s lineup includes Herbie Hancock, who returns for his 28th appearance—the most by any artist—The Pet Shop Boys, Tom Jones, Grace Jones, Bryan Ferry, Taj Mahal, Mavis Staples, George Benson, and Youssou N’Dour. The only thing that can possibly rival that roster is the beautiful setting.

Nestled on the shores of Lake Geneva, Montreux deserves equal billing. The Festival spreads throughout the city’s parks, with food stalls and vendors lining the shoreline promenade. It’s unrivaled setting and unique charms attracted many well-known entertainers including Charlie Chaplin and Freddie Mercury, who both called Montreux home.

For more information about the festival and the full lineup, visit their site.

A Postcard from Provincetown

The “May Snow” of the Lake Geneva Region