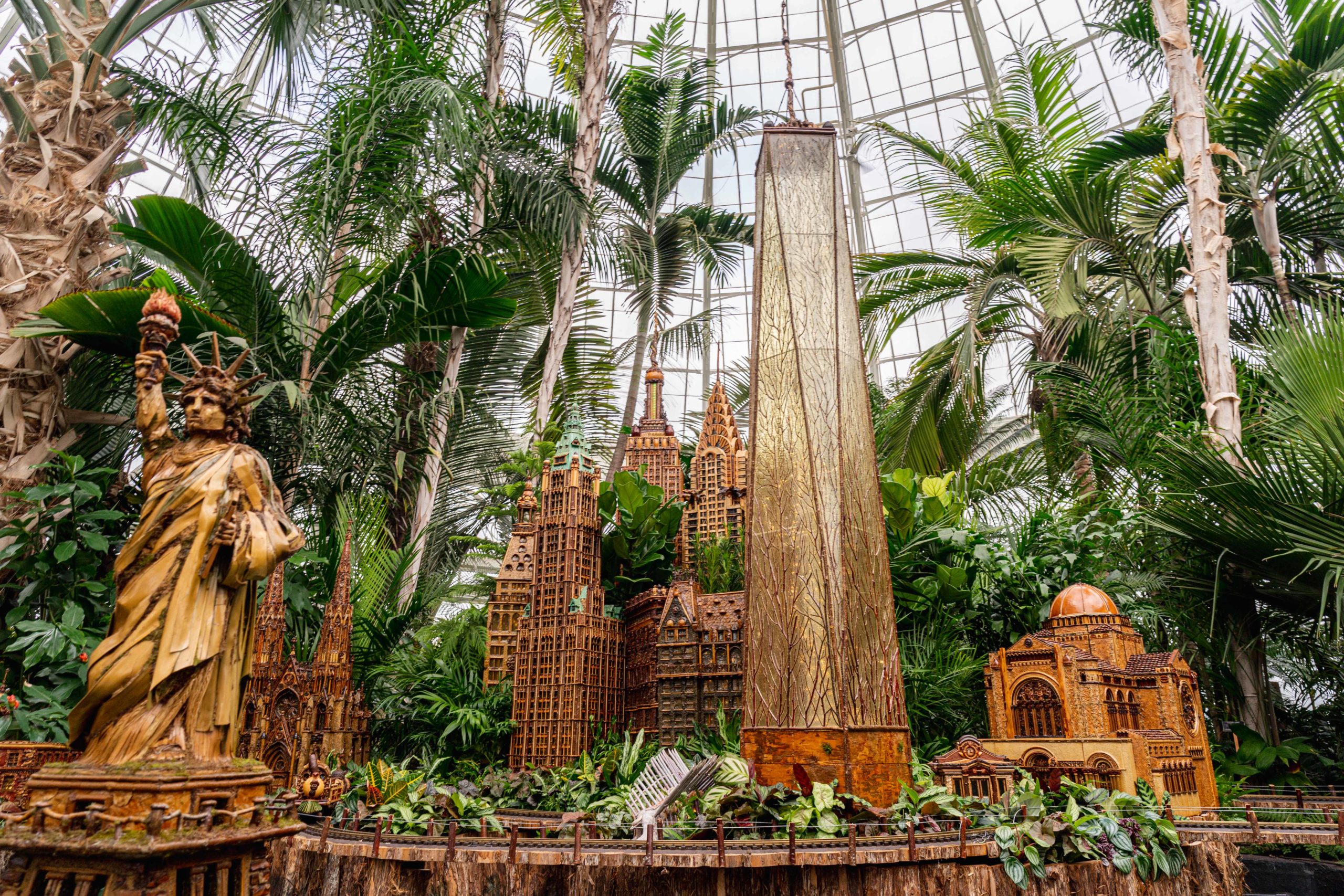 To Mark Its Milestone Year, This Year’s Exhibition Showcases NYBG Buildings and Structures, Including a New Replica of the LuEsther T. Mertz Library Building

The Holiday Train Show®—a favorite holiday tradition—is back at The New York Botanical Garden (NYBG) for its 30th year. Visitors will marvel as model trains zip through displays of NYBG’s collection of more than 190 replicas of New York landmarks, which have been artistically crafted out of natural materials such as leaves, seeds, twigs, bark, acorns, and pine cone scales. To mark its milestone 30th year, the Holiday Train Show features a showcase of NYBG’s buildings and structures, including a new replica of the majestic LuEsther T. Mertz Library Building, along with the iconic Enid A. Haupt Conservatory. The Holiday Train Show opens to the public on Saturday, November 20, 2021, and runs through Sunday, January 23, 2022.

Featuring a miniature wonderland in the warmth of the Haupt Conservatory, the Holiday Train Show includes such famous New York landmarks as the Statue of Liberty, the Empire State Building, One World Trade Center, Rockefeller Center, Radio City Music Hall, and many other favorites, all crafted by the creative team at Applied Imagination in Alexandria, Kentucky.

More than 25 G-scale model trains and trolleys hum along nearly a half-mile of track in the Holiday Train Show. American steam engines, streetcars from the late 1800s, and modern freight and passenger trains travel along overhead trestles, through tunnels, and across soaring bridges such as the Brooklyn Bridge and George Washington Bridge.

In recognition of the Holiday Train Show’s 30th year, the artists at Applied Imagination have re-created one of the most significant sites at The New York Botanical Garden: the LuEsther T. Mertz Library Building, the Lillian Goldman Fountain of Life, and the John J. Hoffee Tulip Tree Allée, which were collectively designated a New York City Landmark in 2009.

The Mertz Library Building, the centerpiece of this grandly designed site, houses the most important botanical and horticultural library in the world, with more than 11 million archival items spanning 10 centuries. Designed by architect Robert Gibson, the building was completed in 1901 in a style reminiscent of a Roman Baroque palace and is capped with a green copper dome. The replica’s façade is constructed of horse chestnut bark to represent the structure’s stone blocks, with accents of mahogany pods, cinnamon pods, and black walnuts, among other natural materials. Creating it took an estimated 900 to 1,000 hours.

The Goldman Fountain of Life, a dramatic composition of mythical figures in front of the Library Building, was designed by American Renaissance sculptor Charles E. Tefft in 1905 and was restored in 2005. The replicas of the fountain’s Beaux-Arts sculptures, including charging seahorses, a lively nymph, and a startled mermaid and merman, are covered in tobacco leaves, with grape vine tendrils for the figures’ hair. The fountain’s basin is fashioned from large shelf fungus.

Leading up to the Library Building and fountain is the Hoffee Tulip Tree Allée, four rows of distinguished native trees that were planted beginning in 1903. The Tulip Tree Allée has since become a signature feature of the Garden’s landscape and living collections and is represented in the Holiday Train Show ensemble by live topiary myrtle trees, whose scale fits in with the overall composition of the display.

This new ensemble complements the botanical renditions of other NYBG structures, notably the Enid A. Haupt Conservatory, a New York City Landmark that is considered one of the most superb glasshouses of its time. Constructed by Lord & Burnham Company and completed in 1902, the Haupt Conservatory consists of 11 interconnected galleries that feature different habitats and plant specimens from around the globe as well as seasonal galleries where annual floral displays and special exhibitions are presented. The wide variety of natural materials used to construct the Holiday Train Show version in 2014 includes birch bark, cinnamon bark curls, wheat husks, and acorn caps. The signature cupola rests on a ring of large pine cone scales and is topped by a mahogany seedpod and a lotus seedpod.

The replica of the Lillian and Amy Goldman Stone Mill dates from the first Holiday Train Show in 1992, which comprised just 15 replicas and four model trains. The Goldman Stone Mill, built in 1840, is one of New York City’s most picturesque extant pre-Civil War industrial buildings. It was designated a New York City Landmark in 1966 and a National Historic Landmark in 1976. The replica is made of tobacco leaves, cork, alder seeds, grape vine tendrils, and Brazilian and turkey tail fungi.

An Expanded NYBG GLOW Returns, and a New Combination Ticket Is Available

In addition to the Holiday Train Show, families and friends can start a new holiday tradition as day turns to night on select dates, exploring the Garden’s festively illuminated landscape and enjoying music, dance, food, and more at NYBG GLOW, expanded for its second year. The outdoor 1.5-mile color-and-light experience will take place from 5 to 10 p.m. on 25 nights starting Wednesday, November 24, 2021, and running through Saturday, January 22, 2022. Visitors to NYBG GLOW will be able to round out their evening with an after-dark visit to the Holiday Train Show by purchasing a special combination ticket. It will be the perfect night out this holiday season.

For more information and to purchase tickets, visit our website at nybg.org