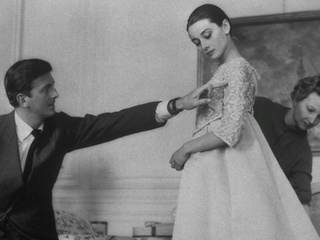 Fashion house Givenchy made history last week when it announced the appointment of Clare Waight Keller as the new creative director of the storied brand, making her the first woman to hold the position. Her appointment by CEO Philippe Fortunato has been seen as a continuation of his efforts to embrace Givenchy’s 65-year history as a way of looking forward. According to WWD, the house has invested substantially in restoring its archive as a tool for design inspiration, which Waight Keller will explore as a way to, in Fortunato’s words, “embrace the world of Givenchy and what we stand for.”

The World of Givenchy

The world of Givenchy is synonymous with the world of haute couture and has long been associated with the glamour of film star Audrey Hepburn. The lives and careers of Hepburn and designer Hubert de Givenchy were intertwined for decades. Givenchy, one of the most eminent designers of the 20th and 21st centuries, was the favorite designer of Hepburn, famed for her roles in such films as Roman Holiday, Charade and My Fair Lady. Now the designer and his muse will be celebrated with three concurrent museum exhibitions this spring in Morges, Switzerland, where Hepburn spent the last three decades of her life. “Audrey Hepburn and Hubert de Givenchy:  An Elegant Friendship” featuring more than 50 original gowns, hats, and accessories; as well as 60 sketches created especially for the occasion along with previously unseen photographs will be on view at three separate venues. Fondation Bolle will display sketches, dresses, photos, and a documentary movie. Morges Castle will offer a retrospective of Givenchy’s work, including garments, accessories, and designs. And the Musée Alexis-Forel Morges will present an homage to Hepburn by Givenchy, featuring sketches, Audrey Hepburn’s dresses, photos, and magazine covers. The exhibitions run from May 20 to September 17, 2017.

The New York Botanical Garden Celebrates the Holiday Season Day and Night with the 31st Year of the Holiday Train Show® and the Return of NYBG GLOW, N.Y.C.’s Largest Outdoor Holiday Light Experience, Expanded for Its Third Year