Spooky Pumpkin Garden Nights are back and better than ever at The New York Botanical Garden (NYBG) with fun for all ages. Wear Halloween costumes and use your flashlight to explore the twisting trails of the Everett Children’s Adventure Garden with a plethora of activities. Elsewhere on the grounds, encounter Giant Skeletons on Parade; join a Monster Mash Dance Party; marvel at sculptural Japanese chrysanthemums called kiku; and purchase drinks and light bites as you celebrate NYBG’s spookiest season.

Frightfully Fun Activities in the Everett Children’s Adventure Garden
Decorate a treat bag and gather goodies as you explore the pumpkin and scarecrow-filled trails and activity stations of
the Everett Children’s Adventure Garden by the glow of a flashlight (provided with your ticket). Learn about carnivorous
plants, pumpkins and gourds, owls, bats, composting worms, and the plant origins of chocolate, and see master carver
Adam Bierton transform pumpkins into creepy creatures along the way.

The Secret Life of Scarecrows: Live Shadow Puppet Performance
Under the autumn moon, scarecrows come to life and make mischief in the Children’s Adventure Garden. Using the
magic of shadow puppetry, vintage overhead projectors, and live music, the award-winning cast of Hit the Lights!
Theater Co. weaves an enchanting story of scarecrows that awaken on Halloween night. The 10-minute live
performance will be presented several times throughout the evening. After the performance, head down the Mitsubishi
Wetland Trail where the story continues with an immersive sound installation featuring the sounds of our nocturnal
forest friends.

Monster Mash Dance Party in the Leon Levy Visitor Center
Show off your Halloween best as you groove to music presented by Uptown Vinyl. Food and beer are available for
purchase. 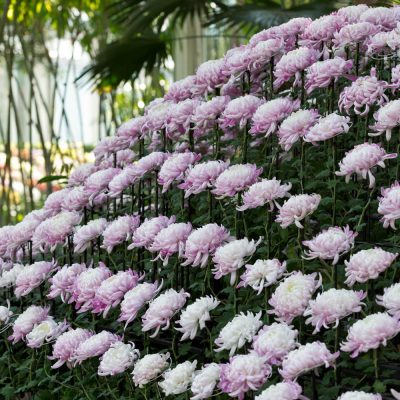 Kiku After Hours in the Enid A. Haupt Conservatory
Marvel at the sculptural plantings found in the kiku exhibition of artfully trained Japanese chrysanthemums.