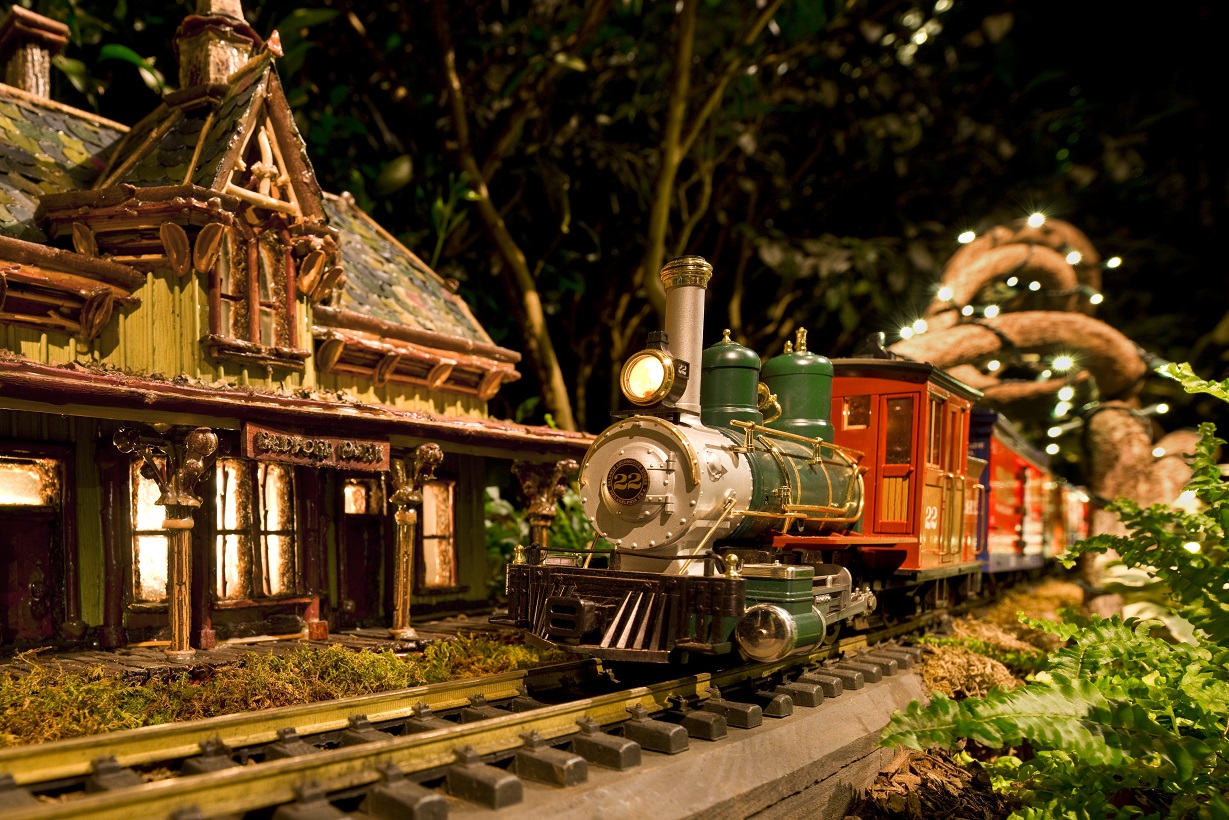 The New York Botanical Garden’s Holiday Train Show® will showcase Central Park—the most popular urban park in America—in the 28th year of this much-loved holiday event. The Holiday Train Show opens to the public on Saturday, November 23, 2019, and runs through Sunday, January 26, 2020.

Central Park, designed in 1858 by landscape architects Frederick Law Olmsted and Calvert Vaux, occupies not only the middle of Manhattan but also a special place in the hearts of New Yorkers and in the American imagination. Visited by more people than any other urban park in the United States, it has been featured in hundreds of movies. Perhaps even more important, Olmsted and Vaux’s “Greensward Plan” inspired cities across the country to set aside large open spaces as public parks. A striking feature of their design was the wide variety of buildings and architectural elements they included to complement the natural setting.

Visitors to New York City can explore the actual Central Park and then take a 20- minute train ride on Metro-North Railroad to NYBG, entering a miniature wonderland as model trains zip through an enchanting display of more than 175 New York landmarks, each re-created from natural materials such as birch bark, lotus pods, acorns, and cinnamon sticks.

New replicas of Central Park’s iconic architectural features will include Belvedere Castle, the Dairy, the Old Bandstand, the Angel of the Waters sculpture atop the Bethesda Fountain, and two graceful pedestrian bridges. They will be arrayed in a tableau with existing Central Park replicas in NYBG’s collection, including the Swedish Cottage Marionette Theater. In addition, famous New York buildings that are either adjacent to the park or just inside it will be on display, including the Plaza Hotel, the Metropolitan Museum of Art, the Solomon R. Guggenheim Museum, and the Rose Center for Earth and Space, part of the American Museum of Natural History. This year, the Holiday Train Show will be presented in a uniquely immersive special exhibition space adjacent to the Enid A. Haupt Conservatory as the Conservatory’s palm dome undergoes restoration, part of the routine maintenance and operations of the Botanical Garden’s facilities. The spacious, climate-controlled exhibition space will be located on the Conservatory Lawn.

In the Holiday Train Show, more than 25 G-scale model trains and trolleys will hum along nearly a half-mile of track past re-creations of iconic sites from all five boroughs of New York City, the Hudson River Valley, and other locations in New York State. Artistically crafted by founding visionary Paul Busse’s team at Applied Imagination, all of the New York landmarks are made from natural materials such as bark, twigs, stems, fruit, seeds, fungus, and pine cones. American steam engines, streetcars from the late 1800s, and modern freight and passenger trains travel underneath overhead trestles, through tunnels, across rustic bridges, and past waterfalls that cascade into flowing creeks. Thomas the Tank Engine™ and other beloved trains disguised as large colorful insects delight children as they whiz by.

The New York Botanical Garden is a museum of plants located at Bronx River Parkway (Exit 7W) and Fordham Road. It is easy to reach by Metro-North Railroad, bus, or subway.